Cindy is a horse in Oregon that developed a Tumor which forced her eye closed for more than a year. Andy and Laurie, Cindy’s owners, decided to use the Guardian. Below you can read their amazing story.

by: Laurie and Andy Jensen

We agonized a long time when the vet wanted to operate on our horse. When we finally agreed, he said it was hopeless and that we should put the horse down, which we could not accept. This is the story of what we did instead, and why the horse is not only still with us, but is returning to normal. We breed miniature and quarter horses on some 34 acres near Rogue River, Oregon. The heroine of our story is a chocolate palomino Quarter Horse, registered name Lady Sassy Ann, barn name Cindy. I trained her for search and rescue work in the sheriff’s posse, and she has always been a good, rock solid horse, unlike some of our other pasture ornaments.

In June, 2004, one of Cindy’s eyes began to swell. Eventually, the tumor got so big (the size of a hardball) that it closed the eye completely. She couldn’t see at all on that side. It was as hard as a bowling ball. By February of 2006 the vet said we should take the eye. Of course we didn’t want to do that, but we didn’t know what else to do. We checked and found that many horses live well with only one eye. We told the vet to get ready to take it. By that time, Cindy had been blind anyway for over a year.. In May, 2006 the vet examined her and said she had cancer. He said that when her quality of life diminished she should be put down. We were not ready to give up on her yet and started looking for something else to do. To reinforce our decision, in late spring Cindy started gaining weight and her coat was very shiny, not symptoms of a horse with cancer.

About that time, I heard an author named Alan Stang on the Jeff Rense radio talk show, talking about his new book, Electronic Medicine: Cure for Cancer? I already knew something about the subject, because Jeff talks about it all the time. Stang mentioned an electronic device called the Guardian, made by Eagle Research, in Greenville, South Carolina. www.eagleresearchllc.com. Everyone has seen the opera singer who shatters the glass, which happens because her note and the glass are on the same frequency. The Guardian is nothing more than a small frequency machine—a homeopathic device—that fits in the palm of your hand. The basic principle of homeopathy is “like cures like.? The Guardian takes frequencies from a living thing—man or animal—magnifies them enormously, and sends the same frequencies back into the body. Bruce Taylor, president of Eagle, was so intrigued when I told him about Cindy that he sent me one and said we could return it in 60 days if it didn’t work. We used the Guardian with Cindy three times the first day.

The next day, her eye—the eye she had been blind in for over a year—was open. A vet in South Carolina who looked at her pictures said he couldn’t believe it, that he had never seen such a thing. . As time passed, the tumor shrank. It had been rock hard. Now it became soft, even mushy. Cindy began to sneeze out large gobs of disgusting gel substance. One was a prize goober 3? or 4? inches long. The gunk on her eyelids began to flake off. After several months the tumor is about half the size it was, she can see and normal color has returned to her eyelids. Most important, the eye looks healthy and she has good sight! 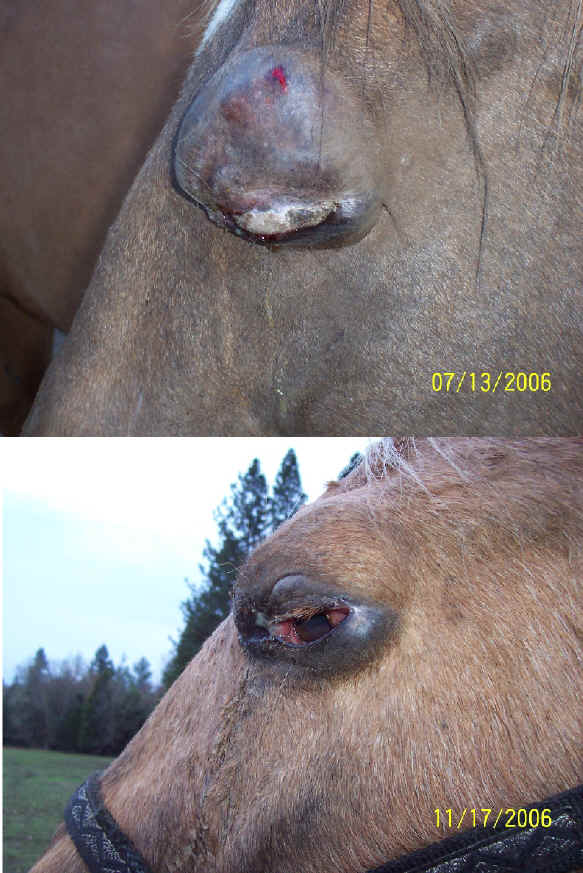 To see the whole story in pictures, go to http://www.wphr.com/cindy.htm There you will see what Cindy looked like at the beginning and what she looks like now. We add to the photo log every few days and you will see there the procedure we use. We feed her during Guardian sessions; she stops eating until she hears the Guardian signal that the session is finished. Then she resumes feeding. She has regained her spirit and is very playful again.

Since we have the Guardian, I tried it myself. I had a bad case of arthritis, with much inflammation. My left thumb was so bad I couldn’t open a jar, couldn’t hold a biscuit of hay. There was a large bump on one wrist from a horse riding wreck. I also had bowled for many years; my big toe joint was swollen and painful. I couldn’t even wear a pair of dress shoes. But that was before the Guardian. Now, after it, I can tear a jar open and toss flakes of hay like a pro. The bump on my wrist is gone. My toe is almost normal again and it doesn’t hurt. I’m sure I could wear a pair of dress shoes, if I owned a pair, but I don’t.

Cindy joins Laurie and me in giving thanks first to Jeff Rense for having author Alan Stang on his show, then to Alan Stang for discussing the Guardian and finally to Bruce Taylor and his staff at Eagle Research for developing it and helping us to use Twenty First Century homeopathic electronics.