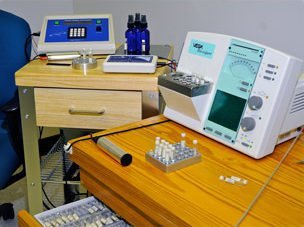 The following will be a layman’s description of an energetic testing technique that goes by many different names: EDS-Electro-dermal Screening, EAV-Electro-Acupuncture according to Voll, Galvanic Skin Resistance Testing to name but a few. The concept is the same with most of these methods though the techniques and approach may differ from one system or practitioner to the next.

In short, it is possible, using EDS, to test for blockages in energy flow throughout the body. Such blockage or resistance may indicate stress or the presence of inflammation. These methods can also test for the body’s response to many different elements–chemicals viruses, bacteria, molds…. The response may indicate toxicity problems or sensitivity to these elements.

The author has been to several such practitioners. They were not given any information about my symptoms or ailments. After about a 30 minute general test session, the results were printed. Noted in the print out were a few areas of stress.These were inflammation, immune system stress and skeletal stress. The practitioner then tested more specifically in the areas indicating the most stress. They were able to pin-point the exact teeth that my dentist had told me needed to be worked on or removed. A few other teeth were also noted to have possible problems. In this test, individual teeth could be rated on a 1-21 scale with 21 being very bad. They also found that the skeletal stress was in two areas which had been giving me problems over the years. No X-rays, needles or blood tests.

This is not to say that other traditional tests have no value. They most certainly do, but consider the possibilities for our healthcare system if all the various modalities could be utilized for the benefit of the patient. Unfortunately, such “alternatives” are looked upon as a threat to Monopoly Medicine and its toxic approach to “health” via the rampant use of drugs and surgery.

The “VEGA Bio-expert” is one model of EDS test equipment. Resistance is measured by a very sensitive metering system–notice the widow on the top right side. A scale of 0-100 is shown with the indicating needle at the 0 position. There is usually a sound indicator which the technician can turn on or off. As the needle rises, so does the audible tone.

Below the meter is a widow used to select and display many different categories–body organs and systems, chemicals, bacteria, molds…

Specific chemicals, viruses, homeopathics… may also be placed into the test circuit via the vial rack on the left side of the unit. With some EDS systems, you may not need the external vials for testing since they have software containing this information.

Think of this testing system as an electrical loop or a water hose loop. A small current or water is introduced to this loop. If there are no blockages or breaks in the loop, the current or water flows freely.

The patient holds the hand cylinder which is plugged into the EDS device. The test probe is also plugged into the device. The probe, is then pressed against a test point on the patient’s body, usually on the hand or foot, depending on the system used and the practitioner. You now have a complete circuit or loop for the small current to flow through. The EDS unit puts out a small direct current of about 10-12 microamperes at about 1-1.25 volts. This current cannot be felt by the patient.

At this point the practitioner then selects various options to include in this circuit. These will include, factors like organs, teeth, viruses, bacterium, mold…. The metering system of the test equipment will react to each selection and the variations will be recorded for further testing. As blockages are found, remedies may then be added to the circuit to see it a positive response results.

This is obviously a very simplified explanation of EDS but, hopefully, one that will give you a basic introduction to this process. We invite you to watch some of the video links which may be found under the “Research” section on our home page. Look for the heading: Bioenergetic Testing. This page will also have links and PDF documents which will give you more detailed information about this form of testing.

There are many things that can be helped by using our equipment but we also recommend that you find an experienced practitioner who does bioenergetic testing. Such a practitioner will be able to help you with complex issues and help you to better utilize your Remedy Maker and Guardian.

Dr Lee Cowden, MD is a Board certified Cardiologist who, over the years, has learned the shortcoming of the traditional medical model. He is now involved with training other practitioners in many of his integrative protocols.

One practitioner’s protocol of testing and imprinting.

Analyzing how our body responds to stimuli.

An explanation of the EAV system