The Guardian Helps Save A Sow From Death 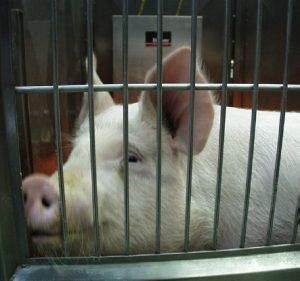 Eagle Guardian was working its wonders out in the State of Iowa at the Witzig pig farm. When you raise some 3,500 pigs a year you are not considered one of the biggest pig farms in the country but that’s a lot more pigs than most of us could imagine. Recently the Witzigs purchased an Eagle Remedy Maker and an Eagle Guardian for use on their farm. A few days ago one of their breeding sows became sick. The owners were concerned enough that they called us at Eagle and asked for some help on how they might help their pig. With the success we had seen with Sammy, our black lab puppy, we suggested they start by using the same protocol that was used to save Sammy’s life and now four other puppies in a row. (Parvo Virus)

Here is an e-mail the farmer sent to our Distributor a few days later:

“This sow (#1712) was having farrowing difficulty. She had 6 live pigs and 4 dead pigs in the morning. She had a very high fever and was having a difficult time breathing (panting). After doing a much weaker treatment with the Guardian in the morning I pulled two more dead pigs. I spoke with Bruce (at Eagle Research) at noon and returned to the barn in the afternoon. She still was breathing hard (almost like pneumonia) and was very weak and looked like she wouldn’t make it. So I did the following treatment.

First, I placed two vials of alcohol/water mixture on the output of the Guardian and plugged the 2” disk in the Input side. I then turned on the Guardian. Then placing the disc on the side of the sow (near the heart) I pressed the Activate switch once. Then I tuned the unit off and took it out into the hall to plug in the wall adapter for a better power supply. I removed the two vials, unplugged the disc, and turned the unit back on. Then placing one vial on the input and one vial on output I pressed the Activate switch. I then switched the two vials and activated them again. I did this step 20 times. Then I removed the two vials and turned the unit off. I then unplugged the power cord so that I could go back to the sow. I plugged the 2” disc into the output side and turned the unit back on. Then, placing the most potent vial that had last been on the output side on the input side and placing the disc on the sow I pressed the activate switch. After about ten seconds and little response I pressed the activate button a second time. As soon as the Guardian beeped this second time the sow sat up and looked back at me. Then she got up and stepped up to the water nipple and started to drink (the first time she had been up or drank in hours). When I returned two hours later she was lying out nursing her pigs. The next morning and tonight she had an appetite and was eating feed and acting perfectly normal. I hope this is helpful for future cases.”

Well folks, you have the whole picture! Here is another huge industry that the Eagle Guardian technology is opening for all of us. As a Distributor of the Eagle Line of Products you should be giving some real serious thought on how you are going to reach the farmers in your area and make them aware of what the Guardian can do for them and their animals. One thing that should come to mind is that these farmers need to see the new DVD video soon. We will also be looking toward advertising and mailings directed to this industry soon We are already making arrangements to have a booth at the next Acres USA Trade Show in Louisville, Kentucky. If you are aware of other ways we can reach this industry please let us know. We hope you will use the story widely for all our benefit – especially for our farmers!