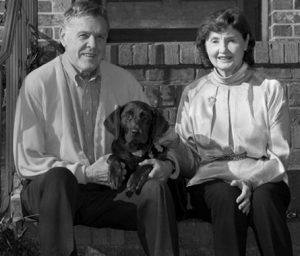 A few weeks ago we witnessed our little six month old Black Lab puppy, Sammy, go through some traumatic times but we praise the Lord for bringing her through this terrible ordeal. She had quit eating one afternoon and by evening was very sick and listless. She grew worse throughout the night.

By the next morning she was getting worse so we took her to the Animal Hospital. She was examined and we were told that she just appeared to have an upset stomach and they gave her a shot to calm things down. Within a few hours it was obvious that she was failing and as it was after office hours we took her to the Emergency Clinic. This time a doctor advised that they felt she had an obstruction in her intestines and they took X-rays which were not conclusive, but they recommended that they operate to be sure. They advised that we should be hearing from them by seven in the evening. Seven came and went and so did every hour till one-thirty in the morning when the doctor called to advise us that they had opened her up but found no obstruction. They sewed her back up and in the morning we had to pick her up and take her back to the local vets as the Emergency Clinic was closing. Little Sammy was now on intravenous feeding and getting weaker and weaker. By evening we took her back to the Emergency Clinic as the local vet would be closed for thirteen hours without anyone being there to watch her and keep the feeding lines open.

In the morning when we went to pick her up, we were advised that Sammy was not doing well and now had an infection from the surgery. Then, some few hours later they called to tell us that they now had found that she was suffering from Parvo, a very dangerous virus that kills many puppies. Only a few years ago the death rate was about 85% and even today it’s a high average that don’t make it. Sammy was put into isolation along with four or five other puppies with Parvo. Two died in the next few days.

When the Vet Clinic closed we had to pick her up, but this time instead of taking her back to the Emergency Clinic for the night, we took her home, deciding that we had to try to do something quickly with the Eagle Research equipment. We had used the Guardian on her for a couple of days, once we found out that there was no blockage, and that probably had helped keep her alive but now she was just about gone. Once we got her home I called Sundara Delphini and briefed her on what was going on and she advised that we would have to do something pretty severe to stop the infection to give her a chance to survive if it were her dog. She suggested we use the Guardian at twenty times stronger than the normal power! That would be at a trillion to the twenty-first power! She said just do this one time and see if her body responds, indicating that it had recognized this powerful signal. If she did respond then do it one more time. Holding the disk on her belly we pushed the button one time. Sammy opened her eyes and looked at us! We took this as the signal we were praying for, so we did it again.

Just a few hours before we left the Emergency Clinic, the Doctor had said that things didn’t look very good. They had just finished their tests and Sammy’s white blood cell count was down to 600 (8,000 – 16,000 is normal). They said this meant that the bone marrow had been overcome by the infection and was no longer producing the white blood cells she needed to survive. At this point we had received the best in Veterinary care, a $2,500+ bill and a deathly ill puppy.

In the morning we took Sammy back to the Veterinary Clinic so she could be on the intravenous treatment. When we went back to check on her about five hours later the Doctor came out and said that Sammy was doing a lot better. He wasn’t sure what happened but her white blood cell count had gone from 600 to 8,000 in just a few hours! She was now a great deal more alert and even moving around.

That very day we brought Sammy home and although she was weak, having lost over eleven pounds, she began eating and a few days later you would not know she had been sick at all! Using the Guardian at higher powers is something that others are experimenting with as well.

This was a very trying experience for my wife and me as we are very much dog lovers and to be able to bring Sammy through this with one of our Eagle devices was such a blessing. This experience will also move the Guardian into a higher plain as we learn more about the technology that we have in our equipment here at Eagle Research. The Lord was very good to have given Sammy back to us in such a wonderful way, and we thank and praise Him for it.